We look at the airports in Cambodia, those currently operating, as well as those under construction, and how the expansion of the Cambodian airport network will help increase the international and domestic tourism industry to grow in the Kingdom.

The Kingdom of Cambodia has seen rapid progress over the past two decades in particular. One of the reasons for the development has been a buoyant tourism industry, with the SEA nation appealing to international visitors and regional tourists from Asia.

As a result, the airline industry and the Cambodian airports have had to keep pace with the growth of inbound and outbound tourists using air travel to reach the key Cambodian cities.

The State Secretariat of Civil Aviation (SSCA) oversees the operations of all airports in Cambodia. Although VINCI Airports (Cambodia Airports or SCA) manages the 3 international airports in Cambodia; Phnom Penh, Siem Reap, and Sihanoukville. A public-private partnership was signed with the Royal Government of Cambodia in 1995, which gives Cambodia Airports the concession for the development and management of Cambodia’s network of international airports for 45 years.

The Cambodian airports have seen a number of renovations over recent years, with more planned. The modernisation and expansion of the runways to support the increased number of passengers are vital as the number of visitors doubled between 2013-2018.

In 2018, the three international airports, for the first time, hit a milestone of 10 million passengers passing through their doors. Eric Delobel, CEO of Cambodia Airports, stated that “connectivity and synergies between the 3 airports have significantly contributed to bringing in more and more passengers to the Kingdom”.

The overall capacity at Phnom Penh Siem Reap and Sihanoukville airports saw passenger traffic reach 11.6 million passengers in 2019. There were also 44 airlines operating at the Kingdom’s airports by the end of 2019. 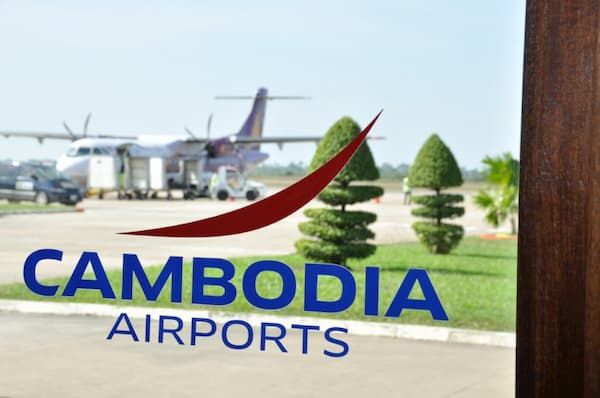 How many airports are there in Cambodia?

As of 2020, Cambodia has 3 major airports operating domestic and international commercial flights.

However, additional airports are under construction and the current ones are undergoing renovation. The government has been studying the potential of more airports; three are already under construction with new airfields in Poipet, Mondulkiri, and Koh Kong being looked at.

There are also many local airports already in Cambodia, some are rarely unused.

In 2019 alone, the following destinations were added, some with new airlines managing flights to the Kingdom to Cambodia’s airports.

Where are the Airports in Cambodia?

As the capital and largest city of Cambodia, Phnom Penh has the biggest and busiest airport in the country.

The runway was extended to 3,000 meters and the Cambodia Airports company hopes that it will sustain the “the country’s continuous growth for the next 10-15 years.”

In 2019, the Phnom Penh International Airport was awarded the best Asia Pacific regional airports for smaller airports category by the CAPA Centre of Aviation.

With the construction of a new international airport in the capital due to being completed in 2023, the Cambodian Prime Minister Hun Sen said the Phnom Penh International Airport will be used as a “military airbase, domestic airport, cargo terminal, plane parking, etc.”

The Khmer Times reported the Prime Minister saying the current Phnom Penh International Airport will be used only for the head of state, heads of local governments and Cambodian senior leaders, as a military airbase, for domestic flights, private jets and for diplomatic officials and foreign leaders.

Siem Reap International Aiport is the closest airport to Angkor Wat and is located only 5 kilometres away from Cambodia’s main destination for tourism.

The Siem Reap International Airport also underwent renovation work which was completed in 2016 and increased the surface area to 26,000 sqm. There is only only one runway at the international airport.

The coastal city of Sihanoukville has seen the biggest changes of all the Cambodian cities and also has the primary seaports in the country.

In December 2016, an infrastructure enhancement program was started, completed in 2018, to enlarge facilities and handle the growth of passenger arrivals at Sihanoukville airport. The works saw the renovations of the existing building and the extension of the current terminal by 80% to 4,800 sqm.

Other areas which were improved were the check-in area, boarding lounge, and baggage claim zone, and the installation of new equipment including the Baggage Handling System (BHS).

There are three planned stages of development at the Sihanouk International Airport which will eventually allow handing capacity for 5 to 10 million passengers from 2030-2040.

The runway is also being extended from 2,500 meters to 3,300 meters allowing for larger aircraft and more international routes to open up. The runway upgrade is expected to be completed in July 2020.

In late February 2020, Cambodia Airports announced a new terminal would also be built to facilitate 3.6 million air passengers for 2020-2030.

Airports under construction in Cambodia

Discussions of a new international airport in Phnom Penh have been ongoing since 2016 but were confirmed in 2018. In February 2020, the State Secretariat of Civil Aviation (SSCA) confirmed the new airport would be jointly developed by Cambodia Airports (SCA) and Overseas Cambodia Investment Corporation (OCIC).

The new airport will be a 4F class airport, occupying 2,600ha in Kandal province’s Kandal Stung district. The estimated cost is expected to be $1.5 billion. It is alleged the airport will be completed by 2023, although this is still to be confirmed.

In mid-2020, the Cambodian government claims the new airport will employ 20,000 workers a day.

The Dara Sakor International Airport was announced in 2016 to be built in Koh Rong province, with works starting in 2018. By late 2019, the Minister of Aviation said the airport should be ready by 2023.

The plans are for the first stage of the airport to accommodate 4 million tourists a year. Yu Yong Yi, who is the Director of the Dara Sakor International Airport construction project, said the Phase I runway is 3.2 kilometres long and 60 metres wide.

In 2019, plans were announced for a new international airport to be built in Siem Reap. At the time, the new proposed airport was said to be the biggest in Cambodia and would be called Siem Reap Angkor International Airport.

The site for the airport is said to be 51km southeast of downtown Siem Reap and 40km from Angkor Archaeological Park. The size of the new airport will be 700ha and cost $880 million to construct.

One of the reasons for building a new airport was due to the “vibrations caused by the take-offs and landings of aircraft may damage the foundation of Angkor Wat and the current volume of air traffic cannot meet the rapid development of the local tourism industry.”

Cambodia has a number of provincial or regional airports listed. Some of these may be used for occasional chartered light wing aircraft or helicopters but are not used commercially. These include some military and private airports.

The global French airports’ company, VINCI Airports, has been operating the main airport hubs in Cambodia (Phnom Penh, Siem Reap and Sihanoukville) since 1995 under the name of Cambodia Airports (of which it has a majority stake of 70%). The company globally operates more than 40 airports served by more than 250 airlines.

The other shareholders of Cambodia Airports are Muhibbah Masteron Cambodia, a Malaysian-Cambodian joint venture which has the remaining 30% stake.